Cob-walled thatched cottages look wonderful from a modern perspective but the every day reality in the past was one of tiny and low rooms, rammed earth floors, damp, rot, vermin, no water supply except shared and often contaminated wells, and little heating or cooking facilities In Fordington, a low lying area on a river flood plain, these factors were compounded by high rents and small ruthless landlords who were frequently tenants themselves. The Mill Street area as it was in the nineteenth century was used by Thomas Hardy who called it Mixen Lane, in The Mayor of Casterbridge as a scene for lawlessness, destitution and desperation.

In 1905 Alfred Harman Edwards, aged nineteen years, started the Mill Street Mission in conditions that had not changed fundamentally from Hardy’s youth. Alfred Edwards’s aim was “to cater for the spiritual and material needs of Dorchester’s poor” in an inclusive manner which welcomed all comers from Dorchester’s staunch chapel and church-attending townsfolk.

He bought a run down cottage at 57 Mill Street and opened it as a rudimentary community centre for jobless men as an alternative to the pubs, mothers with young families, and the elderly, in an area with the worst reputation in the town. His initiative flourished and, by 1930, a new mission centre with hot baths, a laundry, a classroom, and a hall for evangelical gatherings, were being run by seventeen volunteers, a paid worker Miss Godbehear, with a committee and himself as secretary.

From 1927 to 1947 he wrote a regular newsletter for the community around Mill Street called Musings by the Mill Stream which he sold for one penny each. The format consisted of community and personal news interspersed with uplifting evangelical exhortations.

In April 1928, Mr Edwards wrote of two contrasting families fortunes. One had just moved into a new Council House, with three bedrooms, a bath, hot water and a proper kitchen. The other had failed to get a Council House because they had only one child, were living in two rooms but paying a rent similar to that for a whole Council House and were under Notice to Quit as the Landlord felt that he could get a higher rent. He was lavish in his praise for the Council but refrained from publishing what he thought of the private landlord.

Mr Edwards was determined to provide affordable homes to help the families around Mill Street.

It is evident from his writings that the formation of a housing society modelled on successful ones elsewhere became one of his objectives during the late 1920s.  By 1931 he was able to found the Mill Street Housing Society, only the sixth housing association in the country at the time. Three of the old cottages survive in Mill Street, extensively renovated, at 25, 27 and 29 Mill Street.

The Mill Street Housing Society originally had eight members. Mrs Florence Hardy, the second wife of Thomas, was elected the first chairman. The Society’s objective was to build houses or flats to let to working class families at the lowest possible rental.  Renovation of cottages was also undertaken if they were fit for it and could be bought at reasonable cost. The borough of Dorchester authority had completed its first council houses a few years earlier.

The first homes to be built by the Society were in Kings Road in 1932.  By 1934, 155 people were housed in new homes. Finance for the Kings Road houses was raised by way of a donations, shares with an interest rate of 2 1/2% (a low rate of interest at the time which reflects the philanthropic motive on the part of a  purchaser) or by ordinary shares of at £1 each.  No dividend was promised, or ever paid, but a shareholder became a member of the Society and had the right to vote at the AGM. The fundraising was supplemented by a government grant made under the Housing (Financial Provision) Act, 1924.

Alfred Edwards’s son, Maurice took over the work of the Society in 1951.  Under his guidance more homes were built and others renovated.  The tradition is carried forward today by Maurice’s son Rupert who is the present Chairman of the Society and Maurice’s daughter, Julia Gibbs who is an active committee member. 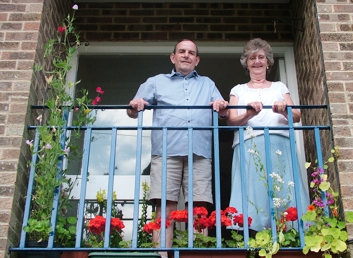 Residents enjoy the view from Fordington Hill House, which was built by the Society in 1972