On 18 October, Sir Philip Williams and Rupert Ewdwards will unveil a blue plaque to honour the founder of the mill street Mission and Mill Street Housing Society, A H Edwards.  The plaque will be placed on Edwards Court, which is situated near the site of the origional Mission hall.

The Mill Street Memories exhibition at the Gallery, Duke's, Copper Street, Brewery Square runs from 10 to 4 from 16 to 20 January.

The exhibition has a large unique collection of photos of the Mill Street area from 1905, local history and stories from people who lived in the in this poor part of Dorchester.

The exhibition was opened by Sir Philip Williams, President of the Mill Street Housing Society and Rupert Edwards, current chairman of the Society.

The Mill Street Memories Exhibition will run from 16 January to 20 January from 10am to 4pm a The Gallery, Dukes, Copper Street, Brewery Square DT1 1GA

Prince of Wales is interested in Mill Street Memories

The huge success of the Mill Street Memories Project in Dorchester has prompted organisers to schedule three talks centred on the history of our County Regiments' activities and the part they played 100 years ago during the Great War.

The first of three talks at St George's Hall in Fordington, Dorchester on 22nd March at 6.30pm will be on the Dorset Yeomanry's famous cavalry charge at Agagia. Followed by the Somme on 12th June and Gallipoli on 28th September.

All three talks will be presented by Captain Allan Wood - a former regular soldier and served with the 17th/21st Lancers who joined The Dorset Yeomanry before becoming a History teacher at schools in Poole. He now lives in Weymouth. He retired from teaching last year and prepared a number of thesis on Military History finally taking examinations to join the Guild of Battlefield Tour Guides.

There will be a small charge to raise funds for local amenities.

The coloured round glass window from the old Mill Street Mission hall has been rescued.  The window was damaged but has been restored by Jon Callen, a well-known local stained glass restorer.  Jon has worked on many windows including the Chapel Royal windows at Hampton Court Palace and is the glass adviser for the Salisbury Diocese.

Brian Cheeseman’s family lived in Mill Street and then moved to Hardy Avenue, where he lived until he was 27 and left home to get married.  He remembers attending services at the mission hall about 75 years ago, when he was a young child.  He remembers “the good people who were there, particularly the teachers Miss Oates, Miss Churchill and Miss Bartlett who lived locally”.  He remembers going from the main brick building where the classrooms were into the Mission Hall for services.  He knew practically everyone, it was such a close community.

There were 20 to 30 children in a class and everyone mixed with everyone else.  “Up to the age of about 10 years old, it was our second home, if you were not at home you were at the Mission.  It was all you had. No one would forget the Mission, that’s for certain.  Without it, what would we have done?” 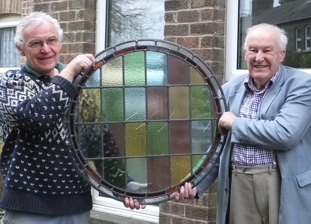 Have you heard of the Mill Street bell?

Another meeting will be held at St George's Church hall from 2 to 4 on Monday 2 February 2015.