The research group for the Community Play in 1985 used public records and newspaper reports to give a vivid account of life in the town in 1854.

Their findings highlight Fordington as the largest and poorest of the Dorchester parishes.  A board of health report for 1848 describes the state of affairs in the Parish and the 1841 Tithe Map illustrates the crowded nature of the area. 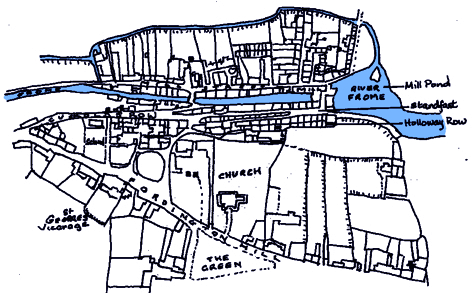 … in High Fordington, from want of means of cleansing, typhus fever has not been absent for the last three years, and in Lower Fordington  there is crowded and pauper population dwelling in the midst of filth…1848 Board of Health.

The situation in Mill Street and Holloway Road was one that had arisen piecemeal, years before the famous cholera outbreak in 1854.  They occupied the only freehold land in an area otherwise controlled by the Duchy of Cornwall.

On 21 September 1854, the newspaper reported that “at the East end of Dorchester, within a space that can scarcely exceed five acres, about 1,100 people are congregated in a set of dwellings, many of which are of the most wretched description and utterly destitute of the ordinary conveniences of life…In Mill Street, the floors of the houses lie considerably below the highest elevation of the pond, some of them are even below its bed…In Holloway Road, about 20 cottages have a patch of ground, about 18 feet square, and a pathway and lane in front of them. They have a little space hollowed out of the hill behind them.  But, with these exceptions, scarcely a cottage has a single inch of ground beyond that on which they stand. Their filth is consequently cast either into the open and wretched drain in the street, or into the Mill Pond.  And it is this same Mill Pond, from which, the people draw their water for washing and sometimes even for culinary purposes, the “conveniences” of more than half the population empty themselves together with the filth of the County Gaol, and some of the portion of three Parishes of Dorchester.  The population, with few exceptions, consists of mechanics, labourers, and paupers from this and many other parishes.  Vice, in its worst forms, abounds amongst them”.

On 28 September 1854, the report continued to describe the crowded state of the homes, “The rent is seldom below 1s 9p a week, in many instances 2s 9p.  For a pauper to meet the lower rate, or for a labourer to, with no assistance from his children and with wages of 8s, or 9s or 10s a week, or for many mechanics with large families, to meet the higher is very difficult.  The consequence is that in most of the better cottages, the wife takes in washing; and in all most all of them, if the families be not large, there are lodgers.  In one cottage in Holloway Road, in which there was a death from cholera, nine persons were sleeping in the single bedroom.  In another with one room down stairs and two above, there were three unmarried women, and four children-two of the women, and two of the children are dead”.

A Dorchester and Fordington Relief fund was set up to help the poor.  A member visited a poor widow, living with her son, an apprentice, a daughter training as a teacher and a younger child, in two rooms without any facilities. She commented that she would like a better dwelling, “but where can I get one?  I pay 2s 2d a week for this.  What, if I could find one should I have to pay for a better?  Who will build cottages for the poor?” 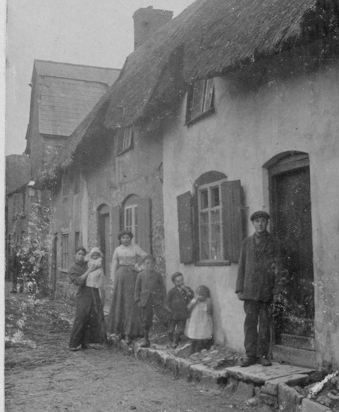